Skip to content
See Topic In The Forum
Reintroduction & Translocations

Although it is impossible to say definitively, we believe that many failed reintroductions could have succeeded if appropriate preparation had been undertaken. Being prepared for a reintroduction requires a good strategy coupled with large investments of time and resources. This requires commodities that are often in short supply in our rapidly changing world—patience and persistence. It may not be possible to know all factors we describe below, but the more that is known the higher the likelihood of success, and practitioners should at least be aware of the gaps in their knowledge.

Reviewing your reintroduction plan by addressing the following questions will allow you to assess your degree of preparedness. This comprehensive list is designed to help practitioners identify gaps in their knowledge. Once knowledge gaps are identified, there is an opportunity to weigh whether there is adequate information to proceed. The risk of proceeding without the knowledge can be assessed along with the risk of taking no action and losing the species. We recommend that reintroductions be conducted as experiments precisely designed to fill in these knowledge gaps. In this way, each reintroduction can not only help future actions for the target species but may in turn help others doing plant reintroductions around the world.

Previous CPC publications have addressed detailed preparations for reintroductions with regard to demography, genetics, and horticultural practice (Falk and Holsinger 1991; Falk et al. 1996; Guerrant 1996). Specific guidance for ex situ collection and management is essential preparation for reintroductions (Guerrant et al. 2004). Our aim here is to provide guidance for establishing sustainable populations in the wild where they may have opportunities for adaptation, evolution and interactions within a natural ecosystem. Although it is necessary to describe the steps of the plan sequentially, often several steps are conducted simultaneously. (See the “Questions to Ask When Planning a Reintroduction” below.)

Questions to Ask When Planning a Reintroduction

Design the reintroduction as an experiment and seek peer review.

Experts operating in different areas of the world are also available. The Center for Plant Conservation provides a resource to learn about reintroductions that have been done and is a source for potential peer reviewers (info@saveplants.org).

The Law, the Land, and Funding

Knowing the biology and ecology of your taxon will benefit the reintroduction plan and experimental design. We advise gathering information from the literature on your target taxon and closely related congeners. If possible, conduct experiments if there are gaps in your knowledge.

Know the species’ biology and ecology.

Choosing a recipient site should be done with great care and intention. Several conditions influence a species’ ability to colonize a new site including functional ecosystem processes, appropriate associated species, and ongoing management to remove threats and maintain ecosystem health. In general, seek a recipient site with great similarity to the place where the rare species is thriving. Knowing the site history may help explain existing conditions. Although it is impossible to know with certainty what a site will become in the future, as much as possible practitioners should try to imagine the future conditions the reintroduced population will face. Ongoing management and threat abatement are essential for maintaining conditions conducive to population sustainability.

In addition, it is important to think about any recipient site in the context of the species’ whole distribution. Because corridors may facilitate migration and dispersal between patches, especially with the onset of climate change (Noss 2001), a reintroduced population can serve an important function of connecting existing populations either by forming a stepping-stone between patches or by expanding the size of existing patches. Connecting 15 or more patches will improve chances for the entire metapopulation capacity (see Hanski and Ovaskainen 2000). (See the “Questions to Ask about the Recipient Site” below.)

Questions to Ask About the Recipient Site

Figure 5.2 – Recipient site assessment based upon ranking criteria related to logistics and habitat quality. The assessment can be used to score a single or to prioritize among multiple sites. Scores ≥ 27 ≤ 54 are acceptable reintroduction sites. When choosing among multiple sites, the best site will have the lowest total score and no single criterion scoring 3. (Adapted from Maschinski, Falk et al. 2012.)

Questions to Ask About Habitat or Landscape Level Considerations

Ideally, the genetic composition of the source material needs to be a balance between representing the local gene pool and creating a new broadly genetically diverse population. Reasons to consider genetic studies in a reintroduction plan include helping to make decisions about appropriate location(s) for collecting source material, confirming whether hybridization may be a potential problem, confirming the species taxonomy, or determining whether to use mixed or single population source material (Falk and Holsinger 1991; Falk et al. 1996; Neale 2012). For example, you may wish to pursue genetic studies if you suspect there are hybridization problems, if the species looks different in different locations, if one or more populations of the species has distinct ecology from the majority of populations, or if it is difficult to distinguish this species from a congener. You may also wish to conduct genetic studies if you know or suspect that your species has variable ploidy levels across populations (Kramer et al. 2018). Conducting a molecular genetics study can help elucidate the mating system; the degree of natural inbreeding; the level of genetic divergence among collection sites or subpopulations; area of seed and pollen dispersal; the degree of genetic relationship or co-ancestry between adult plants in natural conditions; and the neighborhood within which adults are genetically related (Crossa and Venkovsky 2011). (See CPC Best Practice Chapter, “Genetic Guidelines for Acquiring, Maintaining, and Using a Conservation  Collection.”) Often, it will be necessary to work with local geneticists at botanic gardens, universities and/or government facilities to do the genetic studies. Although costs for genetic analysis are becoming more reasonable with technological advances, be aware that adequate funding will be required for proper genetic work. Complementary to genetic studies are hand-pollination studies, common garden experiments, or reciprocal transplant studies. The latter will allow researchers to understand the performance of the species for a particular source in a new setting. Each has advantages and disadvantages.

When are genetic studies needed?

Use a genetically diverse founding population.

Questions to Ask about When are Genetic Studies Needed?

Assessing the genetic diversity of wild populations can reveal insights about the biology of the species, however genetic studies can be expensive and may not always be necessary. They can include either molecular work (genotyping, sequencing, genome or ploidy analysis) or common garden studies. These types of studies are advisable before collecting a rare species or before conducting a reintroduction if the wild populations have any of the following characteristics:

Issues across the species’ range

Questions to Ask About Wild Populations

Choose founders from a single source or mixed populations.

The source material used for any reintroduction may determine its fate. To give the new population the best chance to persist against future stochastic or catastrophic events, it is important to use plants that are adapted to site conditions, have adequate genetic diversity and good health (Falk et al. 1996; Guerrant 1996; USFWS 2000; Guerrant et al. 2004; Neale 2012). Review and account for genetic concerns of source material from collection through propagation in the nursery to outplanting in field. This requires that you simultaneously evaluate and match recipient site characteristics (see “Choose a suitable recipient site” and “Create a sustainable population”) to genetic stock available for the reintroduction.

Review the US Fish and Wildlife Service Policies.

Questions to Ask Regarding the Genetics of Source Material

TABLE 5.1. Advantages and Disadvantages of Using Seeds or Whole Plants for a Reintroduction 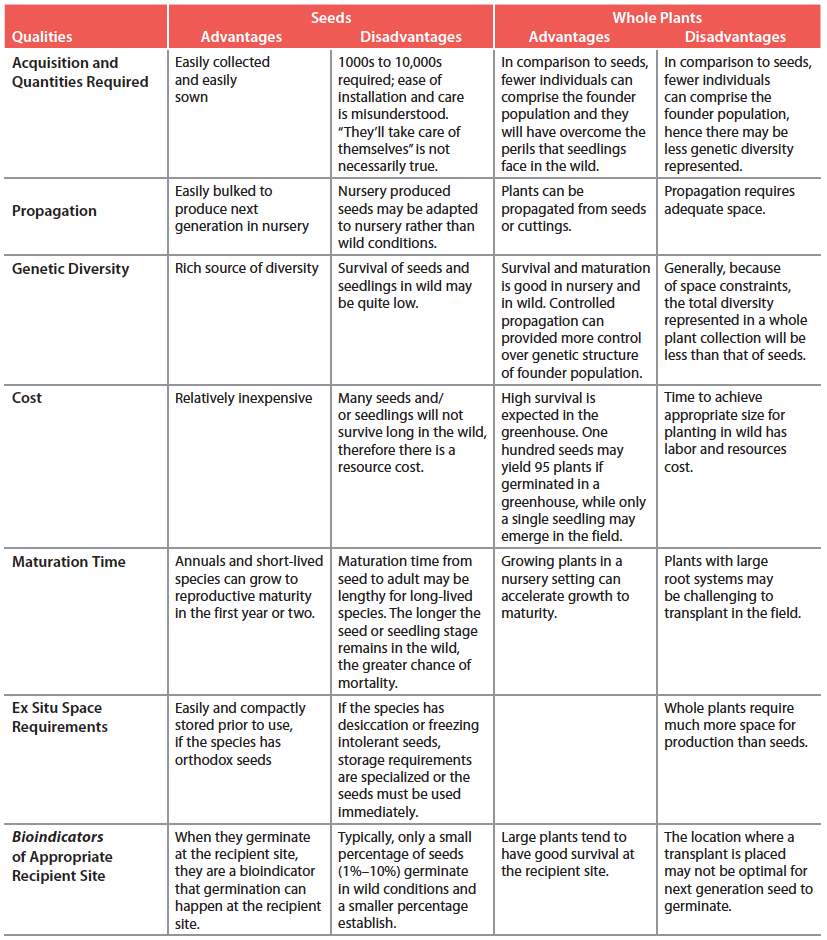 Confirm that successful propagation is possible.

Don’t use all material for the reintroduction.

Questions to Ask Related to Planning for Population Growth

Use as many founding individuals as is feasible.

Related Videos
Identifying Drivers of Orchid Population Dynamics: An Example in the Federally-Listed Threatened Orchid, Isotria medeoloides
The making of a Super Bloom: large-scale reintroduction of an endangered California annual
Citizen Scientist-led Efforts to Save a Species: Safeguarding the Running Glade Clover, Trifolium calcaricum
Building Capacity in Plant Conservation
Back Next