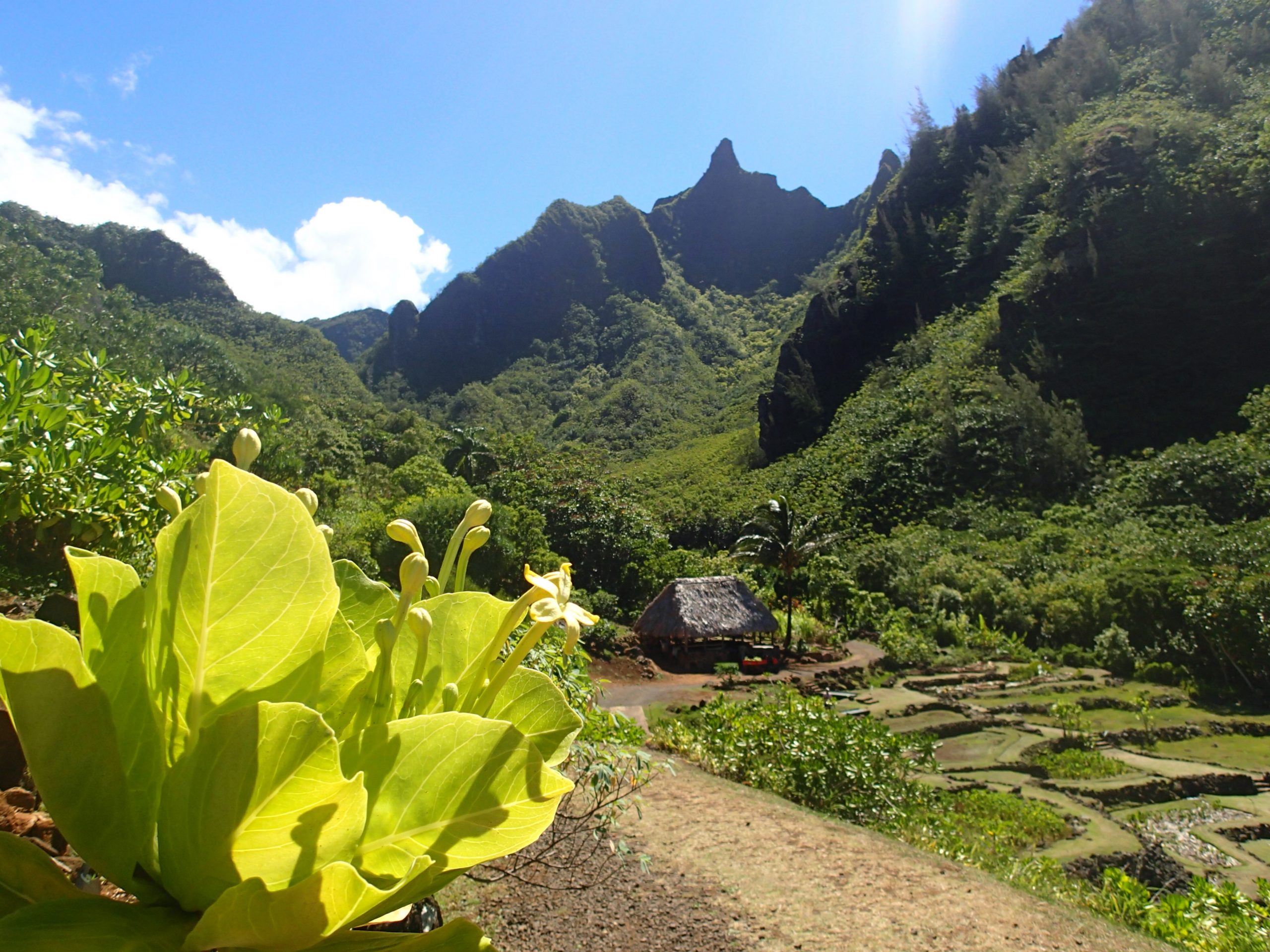 Based on contributions from Jeremie Fant, Ph.D.

Growing on a cliff side in Hawaii a lone alula, or cabbage on a stick (Brighamia insignis) is the last natural, wild member of its species. Fortunately, seed from some 15 individuals had been collected decades ago and the species has persisted in ex situ, that is away from its natural environment, in collections at CPC institutions, allowing the species to persist. But that didn’t mean this unique, Hawaiian endemic was in the clear.

Though seeds were collected along maternal lines and the lead institution, National Tropical Botanical Garden (NTBG), has taken great care to make sure those lines are all represented in each generation they propagate, the main alula collection has shown signs of inbreeding depression (some flower anthers were not developing and hand pollination efforts were not always taking). A genetics study revealed that some of the genetic diversity from the wild had been lost. Preserving the remaining diversity, and maybe even gaining the lost diversity, became a primary goal in maintaining this species. This is where Jeremie Fant, Ph.D., and his molecular ecology lab at Chicago Botanic Garden have been able to help.

Jeremie and his team are drawing on various technologies, from genomics to data sharing, to help take a new approach to maintaining ex situ collections, starting with alula. And the inspiration for the approach came from an unexpected place – the tale of the black-footed ferret.

Once extinct in the wild, U.S. Fish and Wildlife began a breeding program with just 18 ferrets to serve as the founders in the late 1980s. Using assisted reproduction and carefully planned studbooks (a record of pedigrees that informs who should breed with who next) to maintain genetic variability, black-footed ferrets have thrived in captivity and have been successfully reintroduced in the wild. Now there are 18 wild populations, five of them self-sustaining. When Jeremie was thinking about alula and other rare plants with a small number of individuals, he couldn’t help but think of the ferrets and their immense success with such a small number of founders. It dawned on him that careful use of pedigrees could be used to help plant species.

Zoos have been using studbooks for decades to help them maintain ex situ populations and help rare species recover. But the plant world has relied more on maternal lines maintenance – even when hand pollination has been necessary and thus the plant paternity controlled, this hasn’t been recorded. But it could be. And like zoos trading animals or sending sperm to enact the studbooks’ recommendations, botanical gardens could share pollen and help breeding efforts maintain genetic diversity. Having a studbook guide breeding would also help prevent horticultural convenience (i.e., using more seed from the individual that produced the most flowers) from overriding best practices.

The alula was a great species to test this approach on because much of the initial genetics work for the species had been done, its seed can’t be stored, and seed from the initial collection had been shared with other institutions. Finding those institutions was an early step for Jeremie. Though each institution maintains excellent records, the information is not always available to others. He was able to use Botanic Gardens Conservation International’s (BGCI, a CPC partnering institution) database to identify plants which originated from that initial wild-collected seed, held at not just NTBG and Chicago Botanical Garden, but also UC Botanic Garden, San Diego Zoo, and even Switzerland. Data sharing is, and will continue to be an important part of this collaborative project.

Advanced genetic technologies will soon be a part of the effort. Jeremie has been working in the lab building the genomic libraries to look at adaptive traits. Many years ago a genetic study using microsatellite markers was conducted with Kayri Havens, Ph.D., at Chicago Botanic Gardens. These techniques focused on neutral traits (those that may or may not be used by the plant) and helped guide the initial studbook and pollen trades. But Jeremie hopes to use more genomic analyses to make sure they are conserving adaptive genes – the parts of the alula’s genome actually being expressed by the plant.

Advancing technologies mean a lot of genetic information can be collected, but how to incorporate that into studbooks, or population management in general, will need to be worked out. Moving forward it would be ideal for the genetic information and breeding history of the plants at each location to be in one place, to better inform the studbook. Sharing more data and information in accessible databases will be key in helping expand this work.

Technology has opened many doors, but how to best use these new tools and information is often another step. Thus far, the studbook approach is getting good results. The alula at several of the BGCI located institutions have genes no longer being carried in the main NGBT population; these gardens have been sharing their pollen and improving breeding output. With such a promising start Jeremie is hoping the studbook approach can help other rare species. He doesn’t have to look far – one third of the relatives of alula known as the Hawaiian lobelioids, have under 50 individuals and unbankable seed. Hopefully studbooks can be used to save more plants and, like the black-footed ferret, become a conservation success story.

BACKGROUND PHOTO: Aborted fruit can be a sign of inbreeding depression. Despite maintaining collections along maternal lines and ensuring all lines carried on into subsequent generations, some of the plants in ex situ collections in Hawaii were showing signs of inbreeding. Photo by Jeremie Fant, courtesy of the Chicago Botanic Garden.

Plants are, as a rule, promiscuous individuals. Pollen is released in the air or hitches a ride on a pollinator with the hopes of landing on the same species and developing seed. Thus we can’t be sure of paternity (i.e., which plant was the pollen donor) without genetic analyses. Flowers on the same individual, even the same cluster of flowers on that individual could have very different pollen sources, but they will all have the same mother – be from the same maternal line. Tracking maternal lines helps track genetic diversity in ex situ collections.